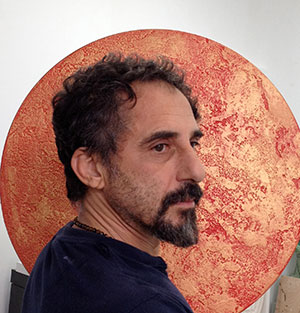 Arcady Kotler’s work over the years has explored the relationship between formal parameters of sculpture and its inner reality. Appropriating aesthetics of modernism as his own point of departure he seeks to create new possibilities beyond modernism’s territory . His works incorporates artist’s own experiences, references to art history, human consciousness and nature.

Kotler’s work embraces the relationships between matter (perceived as solid) and an “empty” space, which permeating it inside out. Artist explores virtually matter-less nature of the material world through the sculpture – yet the most tangible form of art.

Born in 1959 in Moscow, Russia Arcady Kotler received MFA in Fine Art from Moscow State Institute of Art and Technology. Presently he lives and works in New York. The artist has received a number of honors and awards including Artist’s Fellowship Grant and Gottlieb Foundation Grant in 2003.

Kotler’s work has been represented at public and private collections and institutions in United States and abroad including those of the Raymond Learsy- US, Nick Jones- UK, Museum Of New Art (MONA) Chicago, Morris Art Museum, Morristown, Storefront for Art and Architecture, NY, Galleri Infra, Stockholm , Edsvick Kunsthalle, Sweden.

The commissions he created among others include: 9/11Firefighter Memorial,
commissioned by FDNY, “Intersecting Senses” installation at Frihamnent, the Ports of Stockholm, Sweden, 2006 and the sculpture of poet Costas Montis at Columbia University, 2014.